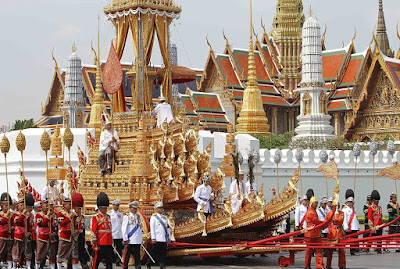 The funeral for Thailand’s King Bhumibol Adulyadej is an elaborate, intricately planned event lasting five days. Here are some facts about the events

The spectacular send-off for Thailand’s late King Bhumibol Adulyadej began Thursday with an elaborate collage of Buddhist rituals and palace protocol, ahead of his cremation at the gilded pyre erected in Bangkok’s historic heart. 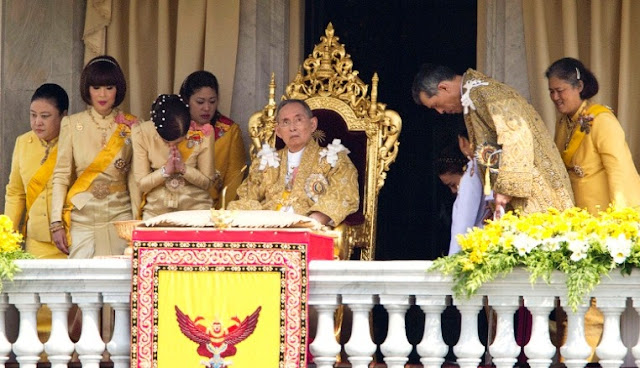 The US$90 million ceremony is a final act of devotion to the “father” of the nation, who died last year aged 88.

Here are a few things to know about the funeral of a king revered as a demi-god, and who reigned for seven decades.

At the heart of the cremation complex is a 50-metre high funeral pyre symbolising Mount Meru, the allegorical centre of the universe in Buddhist, Hindu and Jain cosmology.

The gold-painted structure is adorned with dozens of intricate sculptures of animals, deities and mythical creatures from Buddhist and Hindu lore. 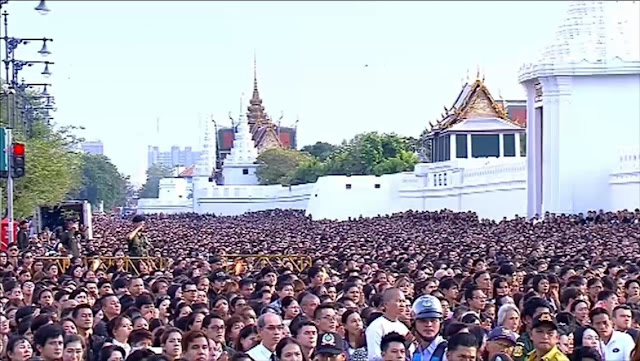 The sprawling site, nearly a year in the making, is studded with references to the king’s welfare projects, including a small rice field and an irrigation wheel.

Bhumibol’s body is kept in a separate coffin to the symbolic Royal Urn, which will be carried up a ramp on a golden chariot to the pyre. Both the urn and coffin will be cremated, allowing his soul to pass into the afterlife according to Buddhist belief.

While sombre, the funeral is also a celebration as the late king ascends to heaven, with music and traditional dancers a key part of the ceremony.
The funeral formally began on Wednesday with a Thai Buddhist religious ritual led by Bhumibol’s only son King Maha Vajiralongkorn, known as Rama X. His father was Rama IX of the Chakri dynasty. 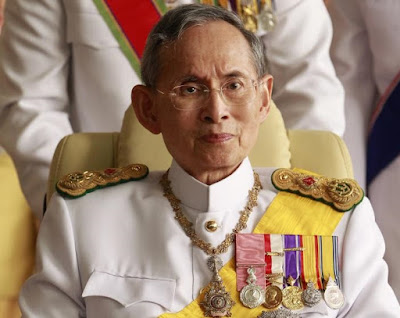 On Thursday the king joined monks in a remarkable ceremony, aided by palace officials shuffling on their knees to take the Royal Urn down for a procession from the Grand Palace to the cremation site.
A gun salute also rang out.
On its way to the cremation site it will pass tens of thousands of black-clad mourners who are expected to bow and prostrate where possible.
A bank of monks will lead Buddhist prayers throughout the day-long ritual.
As dusk falls, the king and other royals will lead the laying of sandalwood flowers at the urn.
The cremation itself will take place at 10pm (11pm Hong Kong time) when Rama X will light the pyre.
Three days of ceremonies to remove royal relics from the ashes will follow. The ashes will be taken to the Grand Palace while the relics will be enshrined in two temples.
The late king’s dogs
Sculptures of King Bhumibol’s favourite dogs will have place of pride among the 500 depictions of animals, gods and mythical creatures adorning the crematorium. The 70cm tall painted statues of Tongdaeng and Jo Cho will be on the top tier, near the bier for the royal coffin.
Tongdaeng, a stray adopted by the king in 1998, gained fame when the king penned a short book in 2002, The Story of Tongdaeng, widely seen as parable for how the monarch thought Thai people should continue to hew to tradition in the globalised world of the 21st century. 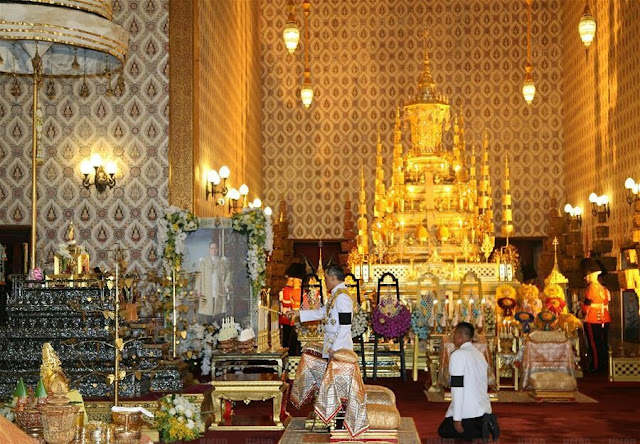 “Tongdaeng is a respectful dog with proper manners; she is humble and knows protocol,” the king wrote. “She would always sit lower than the king; even when he pulls her up to embrace her, Tongdaeng would lower herself down on the floor, her ears in a respectful drooping position, as if she would say, ‘I don’t dare.’”
Urn vs coffin
By tradition, the bodies of deceased members of the royal family have been kept upright, in an elaborate urn. But Bhumibol and his late mother and sister, who all spent much of their early lives in the West, opted for their remains to be put in a coffin, with the urn still placed next to it for traditional devotional purposes.
When Bhumibol lay in state at the Grand Palace for the year after his death, the empty urn was placed on its pedestal, with the coffin behind it. Bhumibol’s coffin is made of aged teakwood, plated with pure gold and lined with ivory coloured silk
A new gold-plated royal urn, etched with traditional royal patterns was fashioned in 2000 to replace one made in 1900 during the reign of Chulalongkorn. It was first used for the 2008 funeral ceremonies of the king’s sister, Princess Galyani Vadhana, and is the one being used for Bhumibol’s funeral rituals.
The practice of keeping the body in the urn has not fallen into complete disuse. The remains of Princess Bejaratana Rajasuda, the only child of King Vajiravudh, were kept in an urn for her funeral in 2012.
Sculptor’s gaffe
It must have seemed like a good idea at the time to sculptor Pitak Chalermlao, who was preparing a 2-metre statue of the Garuda, a half-bird-half-human creature in Hindu and Buddhist mythology, for the crematorium.
To show that King Bhumibol was a man of his time, moving the country forward along with contemporary technology, he carved Apple and Google logos on each of the Garuda’s wings and a Facebook logo on its belt buckle.
Proud of his idea, he posted photos of his work on Facebook, naturally. Then the slings and arrows started coming, first from netizens who found the concept offensive, or at least inappropriate.
The cremation project’s overseer, the government’s Fine Arts Department, was just as unhappy, and ordered the social media logos excised. It said they failed to properly honour tradition and the spirit of the occasion.
The abashed sculptor apologised and said he only meant to show that Bhumibol was a man with modern as well as traditional knowledge.
Sandalwood and paper
Soon after Bhumibol’s death, the Royal Palace sent out an official team, including a Brahmin astrologer, to select sandalwood trees from which appropriate wood could be used for the royal coffin and for the cremation pyre. Four of 19 varieties of the tree were chosen from the traditional venue at Kui Buri National Park in Prachuap Khiri Khan province, blessed for cutting down and transported to Bangkok in a solemn procession.
Hindu and Buddhist funeral ceremonies give great importance to the fragrant wood, which is the preferred fuel for cremations.
At the king’s cremation, “flowers” made of sandalwood will be piled around the urn by senior officials and other privileged persons invited to the inner sanctum of the ceremony.
A mass campaign encouraged the public to show royal devotion by making their own flowers out of paper and depositing them at any of the hundreds of designated locations such as temples and schools and pop-up booths in shopping malls and hospitals. Bangkok’s city government said it expected to produce 3 million of the flowers.
Public participation does not end there. Replica representations of the Sanam Luang crematorium have been erected in all of the country’s 76 provinces, where people can bring their devotional creations.
Guest list
The funeral procession will be headed by the king, Rama X, with his sister Princess Maha Chakri Sirindhorn leading the rest of the royal family.
It is not clear how much of a role Bhumibol’s wife Queen Sirikit will play, as she has been in ill health for years.
Power players from Thailand’s junta and the all-important privy council will also be prominent in the procession.
Royals and dignitaries from over 40 countries will attend the cremation, including Britain’s Prince Andrew, Japan’s Prince Akishino and Princess Akishino, Queen Maxima from the Netherlands, the King and Queen of Bhutan and US Secretary of Defence James Mattis.
Officials estimate that some 250,000 Thais will crush into the surrounding roads, while television will relay blanket coverage of the event.
The meticulously planned funeral comes with a long list of guidelines for attendees in a country where all things royal are tightly controlled
Photographers are prohibited from taking direct shots of the king, while male journalists have been ordered to shave their beards and moustaches.
Tourists affected?
Roads across Bangkok’s historic centre, including the Grand Palace, will be shut.
Tourists are not expected to wear black like most Thais have done since the king’s death in October 2016, but visitors have been asked to dress and behave “respectfully”.
Bangkok’s racy strips of go-go bars have closed for the cremation, while nightlife will be toned down throughout the funeral period. south china morning post
277 Views
Share this on

When was Christmas first celebrated?

Buddhism is Life with Mind.