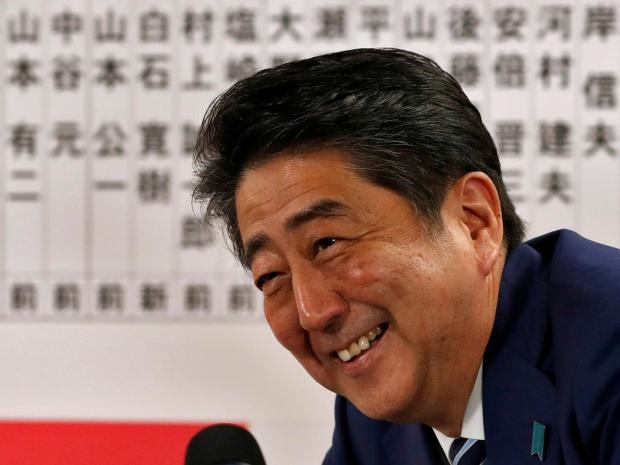 Prime Minister Shinzo Abe said Monday that the ruling bloc’s overwhelming victory in Sunday’s general election represented a “historic” level of public confidence in his leadership and that he will take the result as a powerful endorsement of his pet policies, including revising the pacifist Constitution.

With Sunday’s victory, Abe silenced doubts about his leadership ahead of imminent meetings with world leaders, including U.S. President Donald Trump next month. Taking this into account, Abe announced his intention to seek re-election as prime minister at the Diet, possibly as soon as Nov. 1, when a special Diet session is reportedly set to be convened, and then “swiftly launch a new Cabinet.”
“I am very grateful that the Japanese public has powerfully encouraged us to move forward with our politics based on the solid foundation of our leadership,” Abe told a packed news conference at the headquarters of his ruling Liberal Democratic Party.

As of Monday evening, media tallies showed that Abe’s LDP had secured 281 seats by itself, well beyond the “overwhelming majority” of 261 seats that lets the LDP appoint all chairs as well as a majority of the members in the Lower House standing committees.
The LDP’s impressive showing marked the third consecutive time it has won a majority in the Lower House. Abe said the accomplishment under the same prime minister was a first-ever feat in the party’s 62-year-old history.

Meanwhile, in the shadow of the LDP’s victory, Tokyo Gov. Yuriko Koike’s upstart Kibo no To (Party of Hope) suffered “utter defeat,” she conceded. 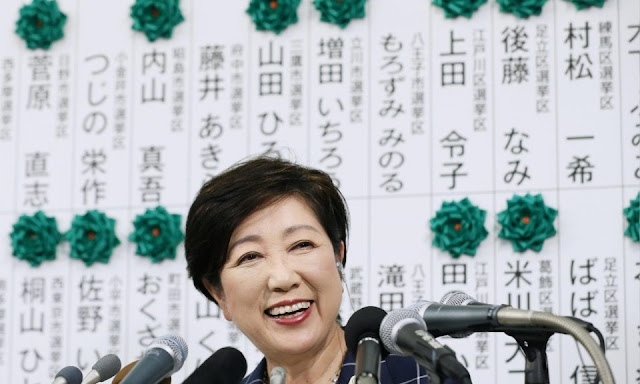 The party, which fielded over 200 candidates, struggled through the final days of the election and had garnered an underwhelming 50 seats as of Monday evening, media tallies showed.
The dismal showing prompted Seiji Maehara, head of the virtually defunct opposition Democratic Party, to announce Monday that he will step down as president to take responsibility.

Last month, Maehara stunned observers by striking a deal with Koike to let DP members run on Kibo no To’s ticket, only to see his move completely backfire Sunday.

Prior to Abe’s news conference, the prime minister met with Natsuo Yamaguchi, head of the LDP’s junior coalition partner Komeito, to reaffirm their solid partnership.

Abe called the snap election last month in part to seek a public mandate for his hard-line approach toward nuclear-armed North Korea — a strategy that dovetails with the pressure-over-dialogue tactic pursued by Trump. 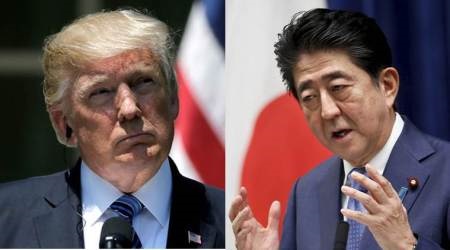 Abe is slated to discuss North Korea with the U.S. leader when he visits Tokyo starting Nov. 5, and possibly with other world leaders, including Russian President Vladimir ﻿﻿ Putin and Chinese President Xi Jinping, during a series of meetings, including the annual Asia-Pacific Economic Cooperation summit scheduled for next month in Vietnam.

Sunday’s election afforded the ruling coalition a two-thirds majority in the Lower House that, coupled with the same type of majority in the Upper House, could let Abe call a national referendum on the divisive issue.

His goal is to rewrite the war-renouncing Constitution by 2020. On Monday, he did not confirm whether he would stick to that timeline. Nor did he clarify he will go ahead with the referendum during next year’s ordinary Diet session based on a draft constitution the LDP could submit to the legislative body as soon as this fall.

The election saw the LDP for the first time go to great lengths to characterize constitutional revision as a “pillar” of its campaign platform, with the party even going so far as to spell out four specific items it hopes to change, including formalizing the status of the Self-Defense Forces, Abe emphasized.

Having again secured the critical threshold, Abe said he wants to “raise public awareness” of the amendment issue in line with the campaign promise he made, and foster discussions within the LDP on how to revise the 70-year-old charter.

Abe added that he will seek to formulate a consensus on the matter across a wide range of the political spectrum by reaching out to opposition parties, including Kibo no To, which aligns closely with the LDP on the issue.

Despite his claimed emphasis on constitutional revision during the campaign, Abe skirted the issue most of the time during a number of speeches across the country in the run-up to the poll.

Asked about his apparent evasiveness, Abe said voters were given booklets this time detailing the LDP’s pledges as they listened to his speech, and that it was his “responsibility” to focus his delivery on issues dear to residents, such as Japan’s demographic problems and recovery from natural disasters.

The ruling camp’s sweeping victory also proved to be revenge for Abe after Koike scored a landslide victory over his LDP in July’s Tokyo Metropolitan Assembly election.

“What can open up the future of Japan is not some kind of performance designed to grab attention or a smooth-sounding slogan. It’s the ability to execute policies,” Abe said, in an apparent jab at Koike’s widely perceived populist tactics.
Japan times