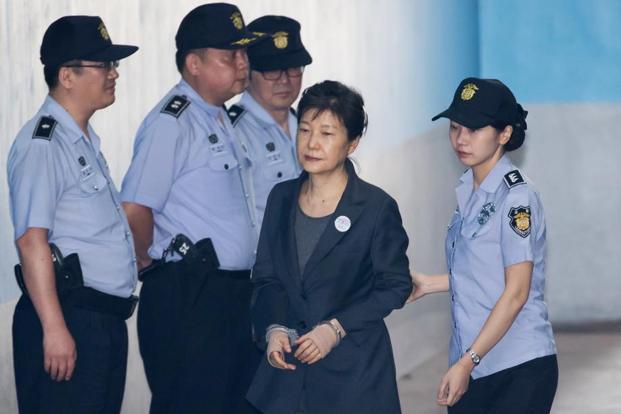 This makes her the nation’s third ex-president to be criminally convicted.

The decision by the Seoul Central District Court came almost a year after she was removed from power.

Park was not in the courtroom to hear the verdict and sentencing.

She submitted her absence note earlier Friday, citing health problems, according to the court.

She has been boycotting hearings since last October.

“As the head of state, Park ignored her responsibility and abused her power to destabilize the country, which is a total disrespect to citizens who elected her as president. Making it worse, she only denied all charges, which is not appropriate,” judge Kim Se-yoon said.

Park has one week to appeal. Park’s lawyers condemned Friday’s ruling and said they’ll consult with Park on what to do.

The prosecution which requested a 30-year prison sentence and a fine of 118.5 billion won ($110 million) in the final hearing in February did not have an immediate response.

The judge found her guilty of pressuring major conglomerates to donate 77.4 billion won to the Mir and K-Sports foundations, organizations controlled by her key confidant Choi Soon-sil. Choi received a 20-year jail sentence in the lower court for taking bribes.

Park was also guilty of pressuring SK Group and Lotte Group to make separate donations to the K-Sports Foundation for projects and granted them business favors in return. 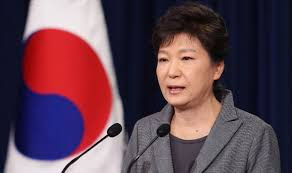 Park was also found guilty of abuse of power in creating a blacklist of artists and writers who were hostile to the government and deliberately excluding them from government support.

However, the judge found Park not guilty of pressuring Samsung Electronics’ Vice Chairman Lee Jae-yong to financially help Choi’s equestrian daughter, Chung Yoo-ra. In return, she allegedly pressured the National Pension Fund, a key shareholder of Samsung’s two key arms _ Samsung C&T and Cheil Industries _ to vote in favor of their merger in 2015. The merge reinforced Lee’s standing in the group’s management. Lee was found guilty of offering bribes to Park. Ex-Minister of Health and Welfare Moon Hyung-pyo was also found guilty of abusing power to smooth out the process. He was sentenced to two and a half years in prison.

Park was elected president of Korea in 2012. As a daughter of Park Chung-hee who ruled the country for almost two decades and its first female president, Park’s victory made headlines in the country and around the world.

Her downfall began with the ferry Sewol disaster in April 2014 in which more than 300 passengers of the commercial passenger ferry died.
The passenger rescue operations were slow and the ferry was not salvaged until last year. The recent prosecution investigation revealed she was irresponsible as commander-in-chief in the time of national crisis and her team at the presidential office faked documents to conceal her dereliction of duty. The disaster fed anti-government sentiment in the public and triggered anti-government protests.

In 2016, a corruption scandal involving her confidant Choi eventually stripped her of her presidential office. On March 10 last year, the nation’s Constitutional Court confirmed her removal from power. She left the presidential office and headed to a detention center in southern Seoul for a criminal investigation into corruption allegations.
On Friday, thousands of Park supporters gathered outside the court in southern Seoul, calling her trial “unfair.”
koreatimes

The biggest creature to have ever walked the Earth.