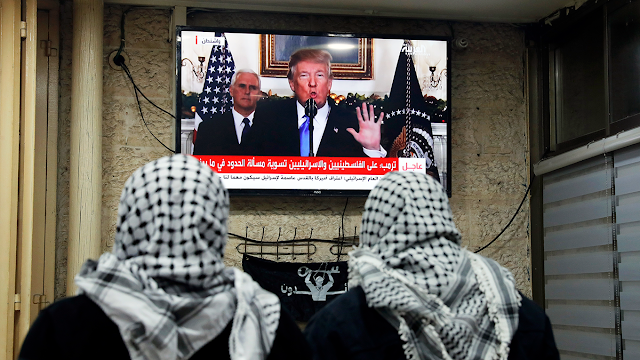 Of all the issues at the heart of the enduring conflict between Israel and the Palestinians, none is as sensitive as the status of Jerusalem. The holy city has been at the centre of peace-making efforts for decades.

Seventy years ago, when the UN voted to partition Palestine into Jewish and Arab states, Jerusalem was defined as a separate entity under international supervision. In the war of 1948 it was divided, like Berlin in the cold war, into western and eastern sectors under Israeli and Jordanian control respectively. Nineteen years later, in June 1967, Israel captured the eastern side, expanded the city’s boundaries and annexed it – an act that was never recognised internationally. 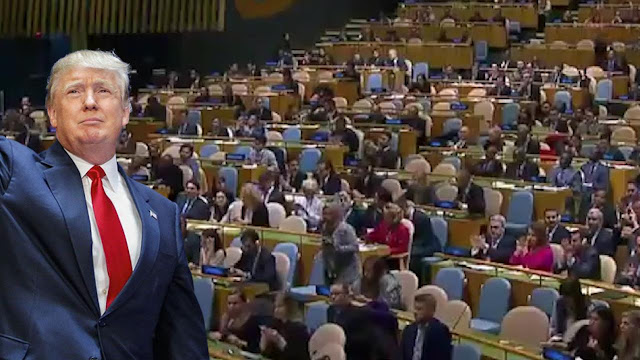 Israel routinely describes the city, with its Jewish, Muslim and Christian holy places, as its “united and eternal” capital. For their part, the Palestinians say East Jerusalem must be the capital of a future independent Palestinian state. The unequivocal international view, accepted by all previous US administrations, is that the city’s status must be addressed in peace negotiations.

Recognising Jerusalem as Israel’s capital puts the US out of step with the rest of the world, and legitimises Israeli settlement-building in the east – considered illegal under international law.

The United Nations body’s debate and vote highlighted for a second time in a week the international isolation of the United States over the Jerusalem issue
The United Nations general assembly has delivered a stinging rebuke to Donald Trump, voting by a huge majority to reject his unilateral recognition of Jerusalem as Israel’s capital.
The vote came after a redoubling of threats by Nikki Haley, the US ambassador to the UN, who said that Washington would remember which countries “disrespected” America by voting against it.
Despite the warning, 128 members voted on Thursday in favour of the resolution supporting the longstanding international consensus that the status of Jerusalem – which is claimed as a capital by both Israel and the Palestinians – can only be settled as an agreed final issue in a peace deal. Countries which voted for the resolution included major recipients of US aid such as Egypt, Afghanistan and Iraq. 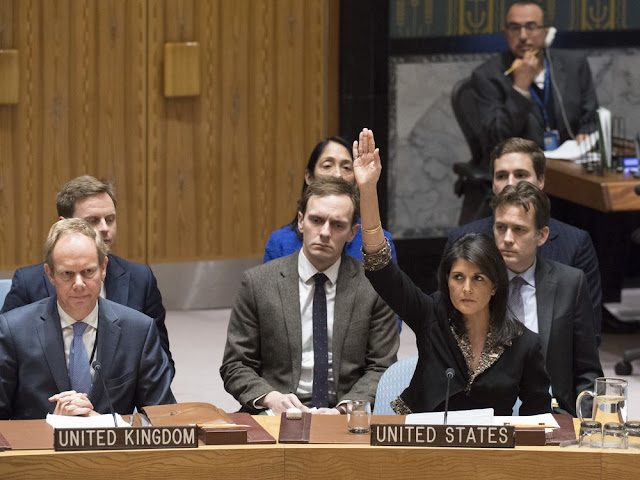 Although largely symbolic, the vote in emergency session of the world body had been the focus of days of furious diplomacy by both the Trump administration and Israel, including Trump’s threat to cut US funding to countries that did not back the US recognition.
But only nine states – including the United States and Israel –voted against the resolution. The other countries which supported Washington were Togo, Micronesia, Nauru, Palau, Marshall Islands, Guatemala and Honduras.
Twenty-two of the 28 EU countries voted for the resolution, including the UK and France. Germany – which in the past has abstained on measures relating to Israel – also voted in favour.
Thirty-five countries abstained, including five EU states, and other US allies including Australia, Canada, Colombia and Mexico. Ambassadors from several abstaining countries, including Mexico, used their time on the podium to criticise Trump’s unilateral move.
Another 21 delegations were absent from the vote, suggesting the Trump’s warning over funding cuts and Israel’s lobbying may have had some effect.
While support for the resolution was somewhat less than Palestinian officials had hoped, the meagre tally of just nine votes in support of the US and Israeli position was a serious diplomatic blow for Trump.
Immediately after the vote the Palestinian president, Mahmoud Abbas, described the result as a “victory for Palestine”. The Palestinians’ UN envoy, Riyad Mansour, described the result as a “massive setback” for the US.
“They made it about them,” Mansour told AFP. “They did not make it about Jerusalem, so when you make it about them and to only be able to get nine votes to say ‘no’ to it, I think it was a complete failure for their campaign.”
Israel’s prime minister, Benjamin Netanyahu, rejected the UN vote out of hand.
“Israel thanks President Trump for his unequivocal position in favour of Jerusalem and thanks the countries that voted together with Israel, together with the truth,” said a statement from Netanyahu’s office.
Speaking to the assembly before the vote, Haley – who earlier in the week told members that the US “would be taking names” – returned to the offensive.
“I must also say today: when we make generous contributions to the UN, we also have expectation that we will be respected,” she said. “What’s more, we are being asked to pay for the dubious privileges of being disrespected.”
Haley added: “If our investment fails, we have an obligation to spend our investment in other ways … The United States will remember this day.”
.the guardian
296 Views
Share this on

Don’t give information to army: vignewswaran tells all state government office in north

President vows to resolve political crisis within a week

Sarath fonseka :There is no belief in hanging.