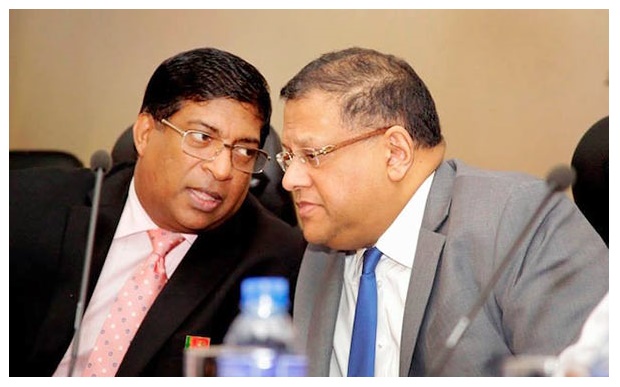 A Presidential Commission of Inquiry has held former Governor of Sri Lanka’s Central Bank Arjuna Mahendran responsible for causing a loss of LKR 11,145 million to public institutions.
In a televised statement on Wednesday, President Maithripala Sirisena said: “I will not hesitate to take steps to recover the loss of LKR 11,145 million to the government and to take legal action against the offenders and punish them.”

The commission had also noted that Prime Minister Ranil Wickremesinghe, who hand-picked Mr. Mahendran for the role, did not take action against him for wrongdoing.
Further, it recommended legal action against former Foreign Minister Ravi Karunanayake for corruption and providing false evidence.
In August 2017, Mr. Karunanayake, a prominent figure in Mr. Wickremesinghe’s United National Party (UNP), resigned amid opposition and civil society pressure.
He is accused of financial links with bond dealer and son-in-law of Mr. Mahendran, Arjun Aloysius, whose firm Perpetual Treasuries bought over 50% of the controversial bond auction in 2015. The commission has recommended legal action against Mr. Aloysius too, among others.
The Central Bank bond scam was the first major blow to the newly-elected government, especially to the UNP. Earlier, in October 2016, a parliamentary Committee on Public Enterprises ruled that Mr. Mahendran was “directly responsible” for the irregularities in the bond sale.
In January 2017, Mr. Sirisena appointed a Commission of Inquiry to probe the matter further, a move that some in political circles saw as a reflection of the growing tension between his Sri Lanka Freedom Party (SLFP) and Mr. Wickremesinghe’s UNP, coalition partners in the government.
The hindu
359 Views
Share this on

769 kgs Cocaine to be destroyed, Today