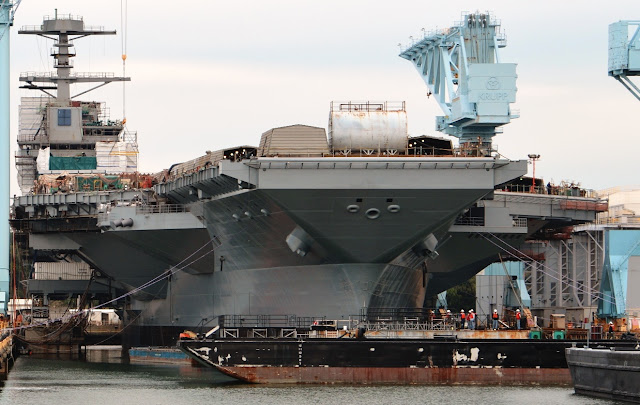 Reflecting the growing relationship between the U.S. and Sri Lankan navies, this is the first time an aircraft carrier has visited Sri Lanka since 1985, and follows the recent completion of the inaugural bilateral Cooperation Afloat Readiness and Training (CARAT) naval exercise. 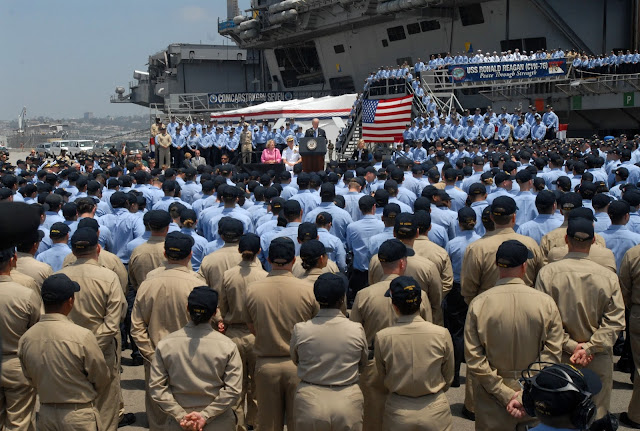 “Building our maritime partnership in step with Sri Lanka’s own progress on reconciliation and human rights advances our shared national goals of fostering security and stability,” said U.S. Ambassador to Sri Lanka and Maldives Atul Keshap.  “I’m delighted that U.S. sailors will have the chance to visit Sri Lanka, meet with its wonderful people, and take part in public service activities at schools, hospitals, and rest homes that will improve the lives of Sri Lankans of all ages,” he added.

It is estimated that the carrier strike group will add approximately 1.54 trillion rupees ($10 million USD) to the Sri Lankan economy as the ships purchase supplies and thousands of U.S. sailors come ashore and support local businesses.  During the visit, sailors will have opportunities to explore the local community and meet with their counterparts in the Sri Lankan Navy.  While in port, sailors will also work with local non-profit organizations to support community service events at a local hospital, an orphanage, and other sites.

“There is an excitement among the crew to experience everything Colombo has to offer,” said Rear Admiral Gregory Harris, commander, Carrier Strike Group 11. “There is a sense of adventure and anticipation for this visit since few in the crew have previously been to Sri Lanka.  Our visit will be a great opportunity to enhance our relationship with Sri Lanka through cultural exchanges and other exchanges, relationships that I suspect will last long after we depart.”

The USS Nimitz is more than 23 stories high from the keel to the top of the mast and is approximately 333 meters long.  It can accommodate more than 5,000 personnel, with its kitchens providing more than 18,000 meals each day.  It produces 1.5 million liters of fresh water daily and its two barber shops give 1,500 haircuts each week.  The USS Nimitz’s home port is in the state of Washington.

As the lead ship of the world’s most powerful and capable class of warships, the USS Nimitz (CVN 68) has served with distinction and honor in many regional and international crises as our nation’s finest instrument of peace, power projection, and platform for diplomacy, lending to the reputation of her namesake, and motto “Teamwork, a Tradition.” The ship was named for a great military leader: Chester W. Nimitz. 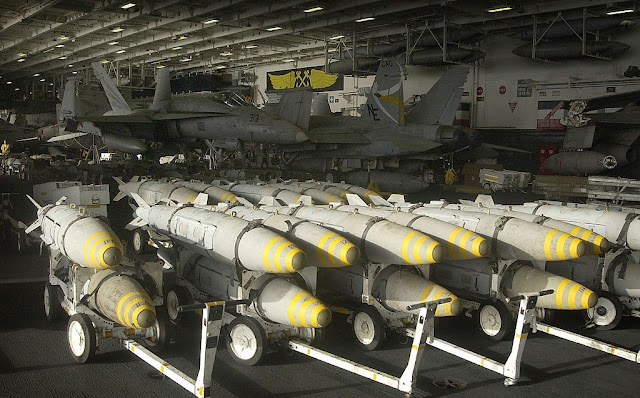 Chester W Nimitz
To honor the accomplishments of Chester W. Nimitz, the United States Navy named its largest and most powerful class of aircraft carrier after the Fleet Admiral.
Nimitz, who died four days shy of his 81st birthday in 1966, assumed the highest position in the Navy December 15, 1945 when he replaced Fleet Admiral Earnest King as the Chief of Naval Operations in Washington D.C.  Under his watch, the Navy experienced great change.  He commissioned the first nuclear-powered submarine and established the Blue Angels. 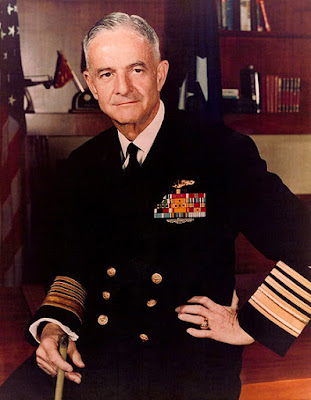 Through Nimitz’ career he helped establish the practice of underway replenishment; he helped install diesel engines in modern Navy vessels. He became one of the first submarine commanders; he built the submarine base at Pearl Harbor, Hawaii. He established one of the first Reserve Officer Training Corps at the University of Southern California. He also worked as the Assistant Chief of the Bureau of Navigation in Washington, D.C.
During the aftermath of the attack on Pearl Harbor in 1941, Nimitz was promoted to the rank of admiral, skipping the rank of vice admiral, and on December 31, 1941 he assumed command of the Pacific Fleet.  When it came to fighting the war, Nimitz said, “It is the function of the Navy to carry the war to the enemy so that it is not fought on U.S. soil.”
Nimitz effectively managed the war in the Pacific through superior leadership and teamwork.  He said, “Leadership consists of picking good men and helping them do their best.”  Nimitz hand-picked the men who served under him and took their advice whenever making a decision.  “Some of the best advice I’ve had comes from junior officers and enlisted men.”

Uss Nimits
After her commissioning on May 3, 1975, Nimitz’ first deployment began on July 7, 1976 when she departed Norfolk for the Mediterranean. Included in the task force were the nuclear-powered cruisers USS South Carolina (CGN 37) and USS California (CGN 36). The deployment marked the first time in 10 years that nuclear-powered ships had deployed to the Mediterranean. 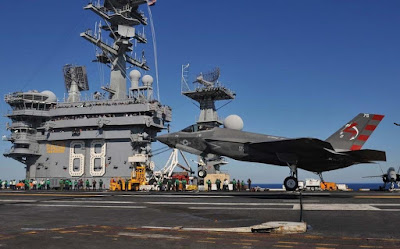 In November 1976, Nimitz was awarded the coveted Battle “E” from Commander, Naval Air Force, U.S. Atlantic Fleet for being the most efficient and foremost aircraft carrier in the Atlantic Fleet. The ship returned to Norfolk on Feb. 7, 1977 after a seven-month deployment. Nimitz again sailed toward the Mediterranean Sea on Dec. 1, 1977. Following a peaceful deployment, the ship returned home to Norfolk on July 20, 1978.
During Nimitz’ third cruise to the Mediterranean beginning on Sept. 10, 1979, she was dispatched to strengthen the U.S. Naval forces in the Indian Ocean area as tensions heightened over Iran’s taking of 52 U.S. hostages. Four months later, Operation Evening Light was launched from Nimitz in an attempt to rescue the hostages. The rescue was aborted in the Iranian desert when the number of operational helicopters fell below the minimum needed to complete the rescue. Nimitz’ homecoming on May 26, 1980 was, at the time, the largest given to any carrier battle group returning to the United States since the end of World War II.
On August 18-19, 1981, during her fourth deployment, Nimitz and USS Forrestal (CV 59) conducted an open ocean missile exercise in the Gulf of Sidra near what Libyan leader Khadafi called the “Line of Death.” On the morning of August 19, two Nimitz aircraft from VF-41, were fired upon by Libyan pilots. Nimitz pilots returned fire and shot both Libyan aircraft from the sky. Newspapers across the country rallied around the incident against terrorist-backing Libya with front page headlines reading: “U.S. 2 – Libya 0.”

Shifting to a Pacific deployment

Nimitz departed the Mediterranean on May 21, 1987, crossed the Atlantic Ocean, rounded the rough waters of Cape Horn, South America, and sailed for the first time in the waters of the Pacific Ocean enroute to her new homeport of Bremerton, WA., arriving there on July 2,1987. In September 1988, during her initial Western Pacific deployment, the ship operated off the South Korean coast to provide security for the Olympic Games in Seoul. On October 29, 1988, Nimitzbegan operating in the North Arabian Sea where she participated in Operation Earnest Will. Nimitz returned home on March 2, 1989. Following an extensive overhaul period, Nimitz departed Bremerton on February 25, 1991, for the Western Pacific and eventually the Arabian Gulf, relieving USS Ranger, during Operation Desert Storm and returned home on August 24, 1991. Nimitz again deployed on February 1, 1993 to the Arabian Gulf, relieving USS Kitty Hawk (CV 63) as part of Operation Southern Watch.

On September 1, 1997, Nimitz set out on an around-the-world cruise that would allow the carrier to return to her East Coast roots and begin a multi-year overhaul at Newport News Ship- building and Drydock Company. During the around-the-world deployment, Nimitz was ordered into the Arabian Gulf to support Operation Southern Watch and various United Nations initiatives; answering each challenge. At times the Nimitz Battle Group was the only force available in the region to enforce U.N. sanctions as lraq launched a campaign of defiance.
Before the cruise was over, the U.S. returned to a policy of keeping two carriers in the Gulf simultaneously. Nimitz returned to Virginia on March 1, 1998 and on May 26, 1998 began her mid-life refueling overhaul.

Sailing to a new homeport

As hostilities grew during the early part of 2003, Nimitz was tasked to set sail in March to support combat operations in Afghanistan and lraq as part of Operations Enduring Freedom and Iraqi Freedom. The ship returned to San Diego in November after more than eight months at sea. As a result of the crew’s hard work and the ship’s success, Nimitz was awarded the Battle “E,” as the finest carrier in the Pacific Fleet; the Global War on Terrorism Expeditionary Medal; the Navy Unit Commendation; and the 2003 Admiral H. Flatley Memorial Award for excellence in aviation safety, in combination with the ship’s air wing, Carrier Air Wing (CVW) 11.

In May 2005, Nimitz embarked on a six-month deployment to the Western Pacific, Indian Ocean and Arabian Gulf in support of Operation Iraqi Freedom and the Global War on Terrorism. These operations helped set the conditions for security and stability in the maritime environment and complemented the counter-terrorism and security efforts of regional nations. While in the Fifth Fleet area of operations, NIMITZ and its embarked air wing, CVW 11, launched more than 4,500 sorties totaling more than 11,000 flight hours.  More than 1,100 sorties and 6,000 flight hours were flown in direct support of troops on the ground in Iraq.
Ships from the Nimitz Strike Group also conducted 286 queries, 410 approaches and 14 boardings of foreign vessels in support of Fifth Fleet Maritime Security Operations. 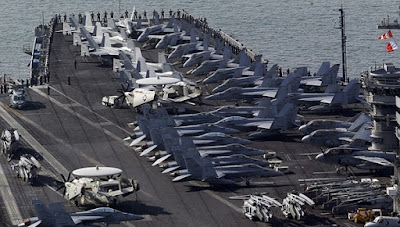 Shortly after leaving the Gulf, the strike group participated in Malabar 2005, the seventh annual bi-lateral exercise between the U.S. and Indian navies. For the first time in the history of the exercise, a U.S. carrier operated together with the Indian carrier INS Viraat (R 22).
During the deployment, the Nimitz Strike Group made a number of port visits throughout the Western Pacific and Arabian Gulf including stops in Hawaii, Hong Kong, Malaysia, India, Thailand, Bahrain, and Dubai, United Arab Emirates. Nimitz also made her first-ever stops in Guam and Fremantle, Australia.  The ship returned to San Diego in November 2005 and subsequently was awarded the Pacific Fleet Battle “E” and the Admiral H. Flatley Memorial Award.
Source material from the U.S. Navy.

I’m still chairman: not take off – did not quit. Mahinda Rajapaksha

Gnasara Thero’s: lawyers decided to appeal against the sentence.