At least 10 people have been killed in a shooting at a supermarket in the US city of Boulder, Colorado and a suspect who was injured in the incident was arrested, according to officials.

Boulder police Chief Maris Herold fought back tears as she announced the death toll at a news conference on Monday night. 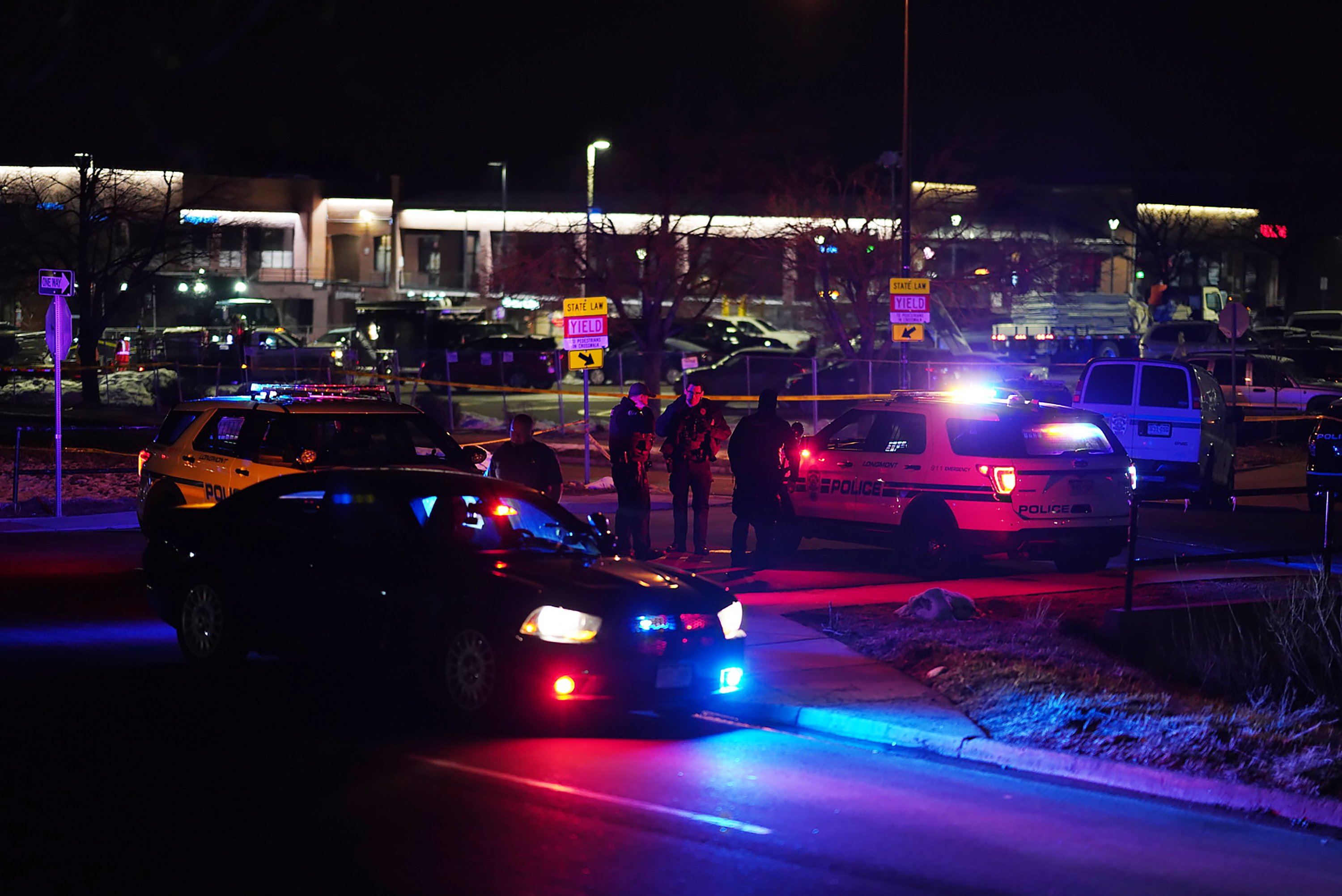 The victims included a police officer, she said.

Victims’ families were still being notified so their names were not released, Boulder County District Attorney Michael Dougherty said.

“This is a tragedy and a nightmare for Boulder County, and in response, we have cooperation and assistance from local, state and federal authorities,” he added.

The shooting occurred at about 3pm local time (21:00 GMT) at a King Soopers supermarket in the Table Mesa area of Boulder, a city at the eastern foot of the Rockies about 28 miles (45 kilometres) northwest of Denver.

Authorities said the suspect was getting medical treatment and there was no further threat to the public.

Video footage from the scene broadcast earlier by television stations showed a shirtless, bearded man in boxer shorts being led away from the shop in handcuffs, before he was placed on a stretcher and loaded into an ambulance.

The man in custody appeared to have a bloody leg and was limping as he walked.

Commander Kerry Yamaguchi of the Boulder Police Department said police were still investigating and did not have details on a motive for the violence. 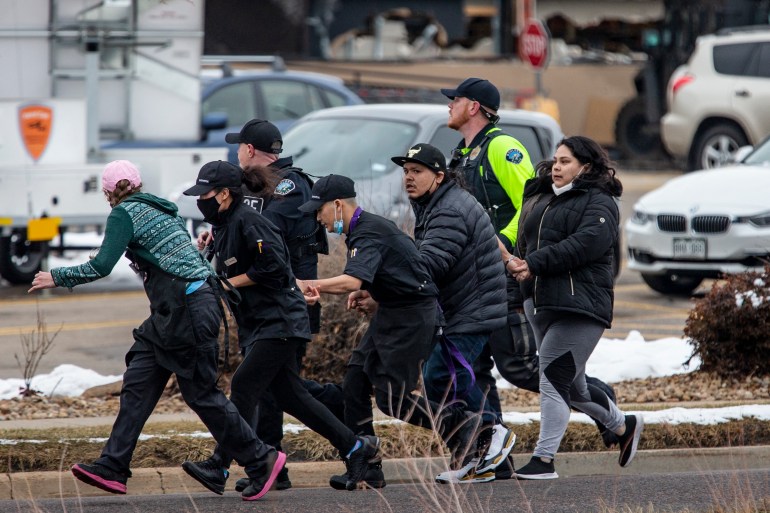 I couldn’t help anybody’

Witnesses described scenes of pandemonium as they heard gunfire ring out inside the supermarket.

“We were at the checkout, and shots just started going off,” said Sarah Moonshadow, 42, who was in the store with her son, Nicholas.

And I said, ‘Nicholas get down.’ And Nicholas ducked. And we just started listening and there, just repetitive shots … and I just said, ‘Nicholas, run’,” Moonshadow later told the Reuters news agency.

Moonshadow recounted seeing “someone laying in the road” as she and her son fled.

“And I tried to run towards him, and Nicholas pulled me away and he said, ‘We have to go.’ And we just ran and hid behind the building.” The woman broke down in sobs, adding, “I couldn’t help anybody.”

Dean Schiller told The Associated Press news agency that he had just left the supermarket when he heard gunshots and saw three people lying face down, two in the car park and one near the doorway. He said he “couldn’t tell if they were breathing”. 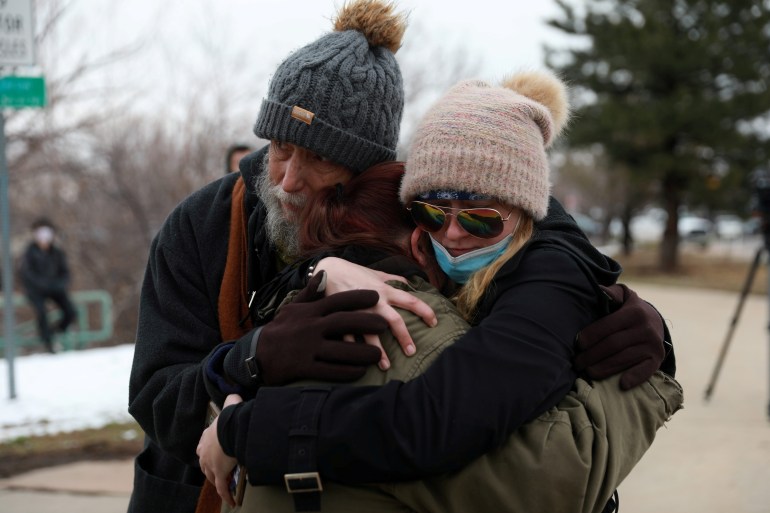 Another witness, James Bentz told the Denver Post newspaper he was in the meat section when he heard what he thought was a misfire, then a series of pops.

“I was then at the front of a stampede,” he said.

Bentz said he jumped from a loading dock at the back of the shop to escape and that younger people were helping older people off it.

Aerial TV news footage showed a heavy law enforcement presence outside the supermarket, along with ambulances and fire engines, as police led customers and workers out of the store with hands on their heads.

Colorado Governor Jared Polis said on Twitter that his “heart is breaking as we watch this unspeakable event unfold in our Boulder community”.

He added, “My prayers are with our fellow Coloradans in this time of sadness and grief as we learn more about the extent of the tragedy.” 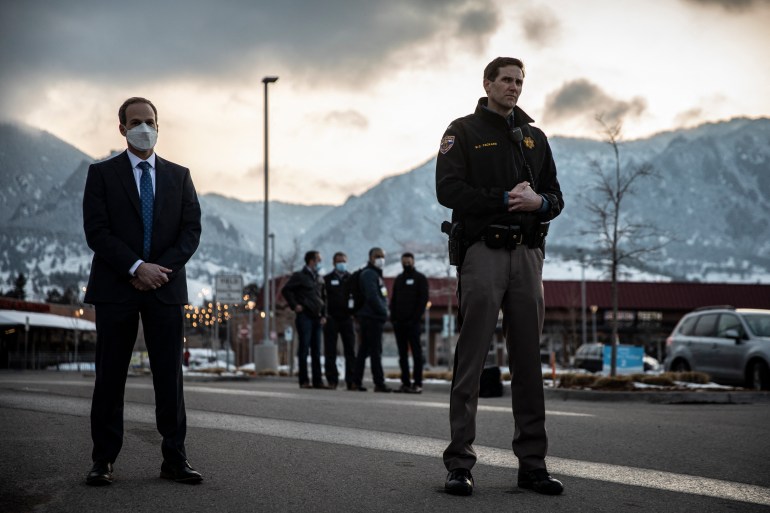 The FBI and agents of the US Bureau of Alcohol, Tobacco, Firearms and Explosives were assisting police and sheriff’s deputies in the investigation, authorities said.

In a statement, the King Soopers chain offered “thoughts, prayers and support to our associates, customers, and the first responders who so bravely responded to this tragic situation. We will continue to cooperate with local law enforcement and our store will remain closed during the police investigation.”

The attack is the seventh mass killing this year in the United States, according to a database compiled by The Associated Press, USA Today and Northeastern University, and follows a March 16 shooting that left eight people dead at three Atlanta-area massage businesses.

There was a lull in mass shootings during the pandemic in 2020, which had the smallest number of such attacks in more than 10 years, according to the database, which tracks mass killings defined as four or more dead, not including the attacker.

Mnangagwa sworn in as Zimbabwean president for next five years

Saudi plane turns around after mother forgets baby at airport