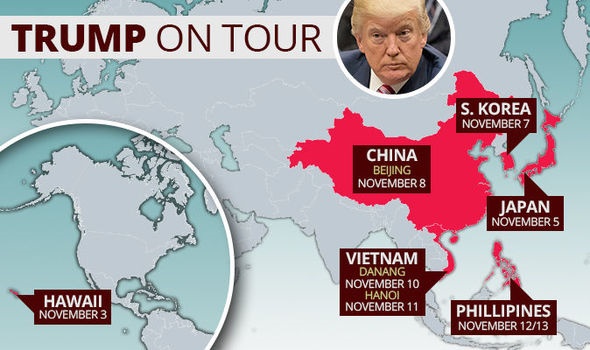 As Donald Trump embarks on his first presidential trip to Asia, will we see a clearer strategy emerge on U.S. foreign policy in Asia? Security issues related to North Korea, along with U.S. trade interests, will top the discussion agenda.
In the first 10 months of the Trump presidency, contradictory statements from the president and his advisers have created uncertainty among Asian leaders. The formal U.S. withdrawal from the Trans-Pacific Partnership (TPP) trade agreement, once the emerging cornerstone of U.S. economic strategy in Asia, has left policymakers and business leaders across the Pacific concerned about the future of trade. And key Asia positions at the State Department and the Defense Department remain unfilled, adding to the mixed messages coming out of Washington.

With an 11-day itinerary including bilateral and multilateral meetings in Japan, South Korea, China, Vietnam and the Philippines, this will be Trump’s longest foreign trip to date. Here are four reasons this trip is so important:

Trump’s trip may shed further light on the direction of U.S. engagement in Asia. Fears linger in Asia that Trump’s “America first” vision may result in U.S. disengagement from the region.
Other than TPP, the fears of U.S. disengagement have not yet borne out. To date,
Trump has not deviated greatly from the Obama administration’s “Asia pivot,” which was in part intended to reassure allies about the continued U.S. presence in the region. A White House news releaseannouncing the upcoming trip stated that Trump’s travels would demonstrate “continued commitment to the alliances and partnerships of the United States in the region.”

In a part of the world where showing up and “face time” matter greatly, Trump’s multicountry itinerary is significant. At the very least, it signals that his administration remains vested in the region. Defense Secretary Jim Mattis also traveled to Asia in October, attending the ASEAN Defense Ministerial Meeting and making stops in Thailand, South Korea and the Philippines. 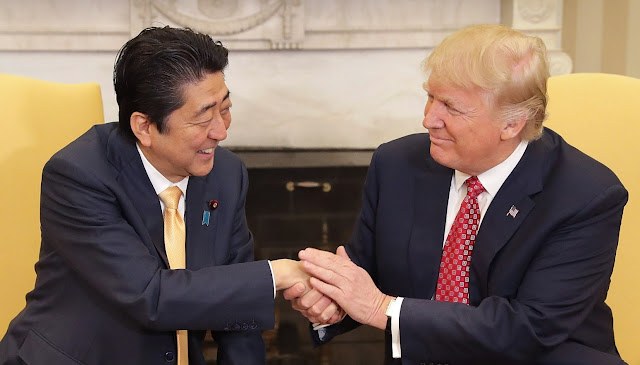 2) A chance to reinforce U.S. ties with Asia
Trump’s Asia trip arrives on the heels of reinvigorated domestic leadership in Japan and China. Prime Minister Shinzo Abe’s decisive electoral victory  Oct. 22 may give him a mandate to expand Japan’s regional security role. Abe is already carrying the TPP mantle forward with the 11 remaining partners in the absence of the United States. Some Asian countries, in fact, see Abe as the “adult in the room” when it comes to regional governance.

[Shinzo Abe won big on Sunday. This is what it means for Japan’s national security policy.]
China’s 19th Party Congress in mid-October cemented President Xi Jinping’s leadership — and unveiled a more assertive regional and global role for China. Xi spoke of a new “balance” in Asia and announced China’s long-term vision of being a “global leader in terms of comprehensive national power and international influence.” Xi’s proclamation made it clear that China will seek the opportunity to fill any power vacuum.
Trump is expected to strengthen his rapport with both Xi and Abe, and also look to deepen ties with other Asian allies. He has hosted several Asian leaders in his first year in office, most recently Singapore Prime Minister Lee Hsien Loong. In June, Trump hosted South Korea’s newly elected President Moon Jae-in at the White House. Trump stepped back from plans to visit Korea’s demilitarized zone next week, but he will meet with Moon in Seoul.
Trump acknowledged China’s support in tightening sanctions on North Korea but believes Beijing must do more to persuade North Korea to take steps toward denuclearization. Trump has an opportunity to make this appeal directly to Xi.
[Xi Jinping just made it clear where China’s foreign policy is headed]
Trump will also push Moon, who continues to look for small opportunities for engagement with North Korea, to apply more pressure against the regime in Pyongyang. Trump will probably reinforce this message with ASEAN leaders — collective action against North Korea will be an easier selling point than ASEAN rallying against Beijing’s South China Sea claims.
4) The chance to negotiate hard on U.S. trade interests
Trump has been incessant in his criticism of U.S. trade imbalances and will no doubt hammer that message hard at the APEC summit in Vietnam. With Japan, Trump seeks a bilateral free trade agreement (FTA), a proposal raised in his first meeting with Abe at Mar-a-Lago in February. Abe may not reject a bilateral FTA outright, but it would be at odds with his hopes to keep alive the TPP deal, which Trump referred to as a “disaster” and “rape” against the American people.
Trump will also lobby Moon and the National Assembly for an improved bilateral trade deal with South Korea. The two sides are renegotiating the 2012 KORUS FTA. Trump’s close associates have persuaded him not to scrap what he referred to as a “horrible” trade agreement. However, the president may make a point of highlighting the widening U.S. goods trade deficit with South Korea, which grew from $13.2 billion to $27.6 billion since KORUS.
Likewise, Trump will address perennial trade issues with China and call on Xi to “rectify” barriers to U.S. commercial engagement in China. Secretary of Commerce Wilbur Ross will lead a delegation of 29 U.S. CEOs during Trump’s visit to China, reinforcing the White House’s determination to level the playing field on trade with the largest U.S. trading partner. The White House has made no secret of its wish to rein in the large U.S. goods deficit with China, estimated at more than $300 billion in 2016.
It’s an ambitious agenda, a lot of miles and a lot of diplomacy for 11 days.
Andrew Yeo is associate professor of politics at the Catholic University of America. He is completing a book manuscript on the evolution of East Asian regional architecture, and is co-editor (with Matthew Green) of “Living in an Age of Mistrust.” The woshington post
349 Views
Share this on

This epic fight in parliament could lead to a new, better democracy