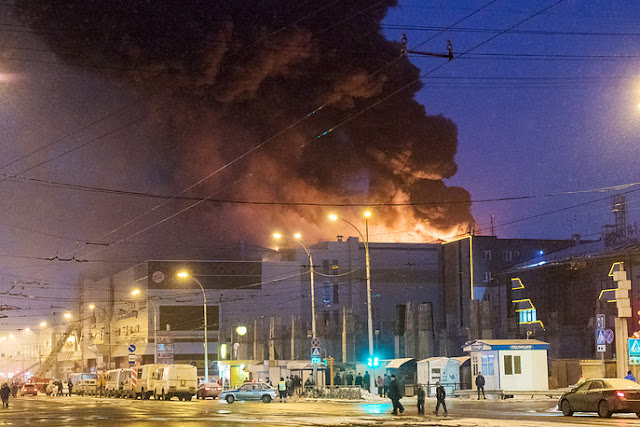 The death toll from a blaze that ravaged a shopping mall in the Siberian city of Kemerovo has reached 64, Russian Emergencies Minister Vladimir Puchkov told reporters.
“Regrettably, we have to announce that 64 people have died in the disaster,” he said. Six bodies are yet to be recovered.
The risk of building collapse remains, nonetheless. According to the emergencies minister, structure reinforcement equipment has been delivered to Kemerovo
Earlier, Russia’s Investigative Committee Spokesperson Svetlana Petrenko confirmed 56 deaths. “After the fire broke out, 44 people requested medical assistance, ten of them were hospitalized,” she added.
Puchkov said earlier that 16 people were still reported to be missing after the deadly blaze.
On March 25, a fire erupted on the top floor of the four-storey Zimnyaya Vishnya (or Winter Cherry) shopping mall, engulfing a total of 1,500 square meters. The fire was extinguished but, in Puchkov’s words, the rubble has started to smolder due to the multilayer floorings in the building. Firefighters are currently dousing the smoldering spots found earlier.
Tass news
235 Views
Share this on

Flash floods in Indonesia and Timor Leste kill more than 50