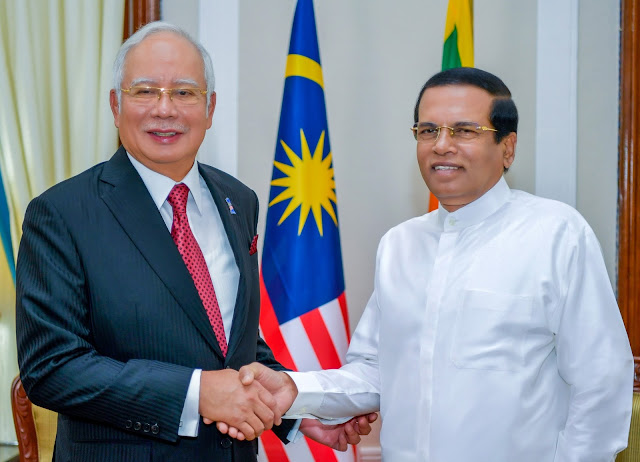 Three agreements were signed after the bilateral talks held between the two leaders, in which, Prime Minister Ranil Wickremesinghe and number of Malaysian and Sri Lankan ministers also participated. The bilateral meeting was held at the Presidential Secretariat, today (18).

The Prime Minister of Malaysia undertook this official visit to Sri Lanka to mark the 60th anniversary of diplomatic relations between the two countries and a special stamp and a First day Cover were issued to mark this occasion.

President Sirisena thanked Malaysia for the continuous support extended to Sri Lanka at the UNHRC and other international forums.

Premier Najib said bilateral trade has steadily grown in the last few years and during the first 10 months of this year, bilateral trade has reached US$680 million. However the trade is heavily balanced in Malaysia’s favour. Hence, Malaysia would explore every possibility to ensure increase of Sri Lankan exports to Malaysia, he assured. The Prime Minister said the proposed Free Trade Agreement will be useful to further expand trade and said his ministers would take steps to speed up talks on FTA.

Malaysia has invested US$ 3.1 in 47 projects in Sri Lanka and Malaysian entrepreneurs are looking into many sectors of potential investments, the Prime Minister said.

Two Memorandums of Understanding on Training of Diplomats and Cooperation in Foresight and Science-2-Action and Memorandum of Collaboration between Coordinating Secretariat for Science, Technology and Innovation of Sri Lanka and Malaysian Bio-economy Development Cooperation SDN BHD were signed between the two countries.