https://youtu.be/YQeLf7ZRBxs In this week’s episode of Worldview, our Diplomatic Affairs Editor Suhasini Haidar tries to unravel one of India’s most…

Beijing plans to overhaul Hong Kong’s electoral system to ensure “patriots” are in charge, a senior official said. A draft…

The circular containing the guidelines with regard to the burial of COVID-19 victims has been issued, the Health Ministry said….

Meghan ‘saddened’ by allegations of bullying at Kensington Palace

India, Japan back in another Sri Lanka port project

The Government has decided to facilitate the burial of COVID-19 victims in the Iranaitivu island in the Northern Province, Cabinet…

China has commended the government of Sri Lanka for its efforts to actively promote and protect human rights, advance sustainable…

While advocating that delivering on the legitimate aspirations of the Tamil community is in the best interests of Sri Lanka,…

The world’s biggest cricket stadium has been renamed after India’s Prime Minister Narendra Modi in a surprise move, hours before…

Imran Khan in Sri Lanka: Multiple facets of a relationship India is watching

The Colombo trip is only Imran Khan’s second foray in the neighbourhood since becoming Prime Minister. His first was to…

18 countries pledge to speak on behalf of SL at UNHRC

SL, PM said, Pakistan is our close and genuine friend

Cartoon of the week

SL, PM said, Pakistan is our close and genuine friend

by February 24, 2021Comments Off on SL, PM said, Pakistan is our close and genuine friend

February 19, 2021Comments Off on Easter Sunday terror attacks: Cardinal, seeking an impartial investigation into a consignment of swords.

Beijing plans to overhaul Hong Kong’s electoral system to ensure “patriots” are in charge, a senior official said. A draft decision on the reforms will be discussed at China’s biggest political meeting of the year, which began on Friday in Beijing. The gathering of lawmakers is called the National People’s Congress (NPC) and runs for […]

February 27, 2021Comments Off on China commends SL for promoting and protecting human rights 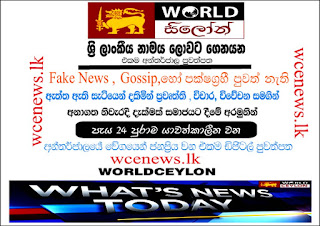